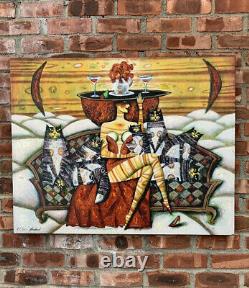 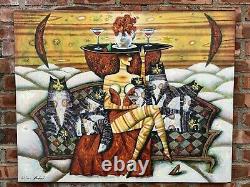 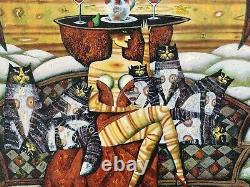 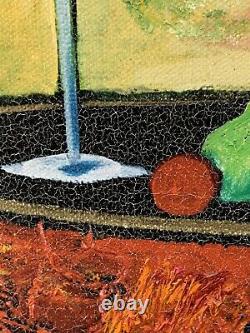 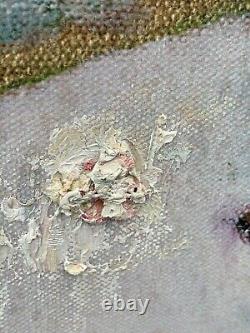 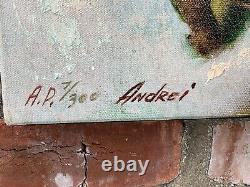 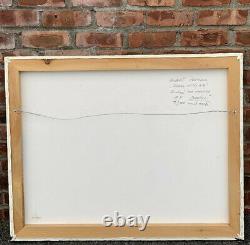 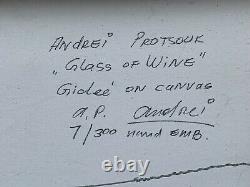 For sale is a wonderful Andrei Protsouk Limited Edition Embellished Giclee On Canvas. Now living in Stroudsburg Pennsylvania Protsouk makes beautiful works of original art and limited edition works. Title: Glass Of Wine (on reverse). Signed: lower left and on reverse. Born in Donet'sk, Ukraine in 1961, Andrei was self-motivated to paint and draw from a young age. His parents, Alexander and Anna Protsouk noticed his innate creative ability at the age of 6 when he impressed them with a clay sculpture of an Indian and a cowboy, possibly an early foreshadowing of his future life in the United States.

Anna, a master embroider and calligraphy artist and Alexander a professional photographer, recognized Andrei's talent as being one of exceptional caliber and therefore encouraged him to pursue fine art for the rest of his life. After high school Andrei had been accepted to the exceptional Lugansk State School of Fine Art, an equivalent of a specialized art undergraduate study in the likes of Moore Collage of Art and Design and Cooper Union here in the U. Andrei graduated from Lugansk in 1981. His teachers had taken a particular liking to the way of his painting and drawing; they entertained and realized the idea for Andrei to pursue a Master's degree of fine art from the then, Ilya Repin Leningrad Institute for Painting, Sculpture and Architecture (now called, the Imperial Academy of Arts) in St.

The Russian Academy of Arts is still to this day regarded, in the art world, as one of the best classical MFA art training programs in the world for its art education curriculum being transcended from the European baroque masters of the 18th century. Andrei was taught under his dream professor at the time, the revered master artist Evsey Moiseenko who was not only famous in Russia but in Europe as well. Moiseenko, who was friends with other masters such as Pablo Picasso, Marc Chagall and Robert Rauschenberg, unfortunately passed away upon Andrei's graduation in 1989.

Being one of Moiseenko's last students, Andrei was heavily influenced by him and was his protégée. Protsouk graduated at the top of his Master's degree and earned the "Lenin's Student Stipend" as well as the "Red Diploma, " the most awarded completion for the diploma in Russia at the time. With growing aspiration and encouragement from his peers Andrei enrolled and pursued the academy's Ph.

Andrei constantly gained notoriety at the academy for his exceptional student work. His drawings were constantly being confiscated by the Soviets to be exhibited in the school's museum for being the school's most exemplar work; some hang in the academy to this day. Furthermore, for Andrei's extraordinary technical skill in composition and quality, his professors recommended him to fulfill the school's commission to put his drawings in a soviet collage text book and in the school's book on exceptional student work. After Gorbachev motioned the end of the Soviet Union, Russia's boarders were open to the free market. Saw a huge demand for Soviet art. Art collectors saw this as a great opportunity to collect a glimpse behind the iron curtain through the vision of its motherland artists. Therefore, while still enrolled in the Academy's Ph. D program, in 1992 Andrei and fellow artists decided to visit the United States and sought this an opportunity for a new beginning. His early work was reflective of harsh Soviet times, prosecution of artists and Soviet living conditions. Andrei represented these themes through the use of heavy textures, dark colors and somber subjects, where today, in contrast, he features bright colors, happy subjects and straight, constructive use of lines. In 1994, just 2 months shortfall of his Ph. D examinations, Andrei decided to move with his whole family to the United States. After establishing himself in the United States with the help of the Bixler Gallery in Stroudsburg, PA, Andrei has showed in galleries in SoHo and the ArtExpo in the Jacob Javitz Convention Center in New York City. He has also been collected by both corporate clients such as Coca-Cola in Denmark; Johnny Walker Expo Co. In England, Francis Lang Art, Hamburg, Germany and private collectors including former President George W. Andrei has embedded his use of line into all of his artwork and has coined this technique as Fine Line. His straight, constructive use of line embodies his classical training in art in every way. In the academy, Andrei was revered as a master of composition where most artists were limited to only a few elements of composition in their artwork, Protsouk incorporated all of the elements of composition in his. This captivates his audience's eyes which are drawn to move around his canvases so that every time anyone looks at his art, the unique composition doesn't make you see his painting the same way twice. Protsouk, today, has come a long way from soviet Russia. He finds inspiration in his environment in all the modern societal activities which can be seen in his paintings. His peer artist and great friend Gennadii Gogoliuk has even expressed his artwork as "Americana Eroticism, " the celebration of love and life in a free American society and enjoying some of life's most simple pleasures.

The language in his paintings can be seen as a continuous folly between his inner Russianess and western life. In brief, his various style changes through time depicts his extroverted inner relationship with the continuous adaptation and understanding of western lifestyles.

His subject matter is his visual philosophical language that creates his unique relationship with his surroundings. Artists see things differently and evoke beauty in what others may seem as usual, mundane or an everyday occurrence. Not to an artist like Andrei. He sees things through the eyes of a true artist representing the world around him as an expression, an extension of his physical being, in his own language and empathy. The soul of his artwork is his infatuation with human relationships, love and beauty. He takes particular interest in representing love; evoking the beauty of monogamous relationships between a man and woman. His paintings often show people doing activities together, flirting, kissing and hugging. He believes that the universal language in the world is love because people live together on this planet synchronously and he embraces that in each painting playfully with unique colors, lines and textures not seen in any other contemporary artists. His artwork is the very synthesis of emotions he feels with his subjects, reflective of his surroundings and his visions of love in the modern world. The evolution of his art has come a long way and can be seen through his various themes since his immigration to the United States.

Andrei lives in Stroudsburg Pennsylvania has his own studio and gallery space off Main Street where he lives with his family. Protsouk now exhibits his art globally. He has been represented in many galleries across the United States, Europe, New Zealand and Japan. This item is in the category "Art\Art Prints". The seller is "upstatetreasures14" and is located in this country: US.