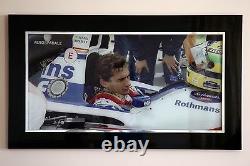 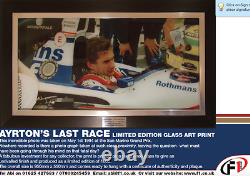 Ayrton's Last Race Limited Edition Glass Art Print. This incredible photograph was taken on May 1st at the 1994 San Marino Grand Prix. Nowhere recorded is there a photograph taken at such close proximity, leaving the question, what must have been going through his mind on that fateful day. A fabulous investment or gift comes in a high quality chrome edged frame with a chrome plaque and a certificate of authenticity signed by the photographer. The print has the limited edition number etched in to the glass and the frame size is 950mm x 550mm and ready to hang.

It was a disastrous crash and one which brought widespread safety checks to the sport. The racing community was devastated. For the first time in twelve years, a Formula One driver had died on a race weekend.

But as medics were attempting to remove an unconscious Ratzenberger from the cockpit, the TV cameras managed to capture a look of despair from a fellow driver - later that day, stories say that man then burst into tears wanting retirement. But there was no time to retire. Come race day, the emotions of qualifying were still fresh in memory and the wavy, brown haired man, who had his despairing reaction captured globally, sat in a blue and white Williams. A yellow, green and blue hooped helmet, to represent the colours of Brazil, situated opposite him on the car as the driver sat there deep in thought processing the.

Madness' that was occurring around him. However there is another person to this.

A young man early in his career working for Pacific Racing stood by the Williams car with a camera in hand. He put the camera to his face and captured the evocative moment but before he had chance for another, the racing balaclava and helmet was on.

From Formula Ford through to Formula One, these two gentlemen have had numerous encounters but unbeknown to either at the time, this was to be the last. Just over 20 minutes after that moment was captured.

Local time, the driver was dead. That driver being Ayrton Senna.

It was Ayrton Senna's last ever photograph. The photograph was then on show at the Senna film premiere. It is printed onto a toughened glass while framed with a certificate of authentication.

But who was this man behind the last ever picture of an icon, a triple world champion, a legend? Now the Chief Executive Officer of Totally Motorsport Group Holdings, Graeme Glew worked on the Formula One grid between 1994 and 2002 with a job to attract new sponsorship for teams.

And with it now the 25th year anniversary of Senna's death, Glew tells his story of arguably the darkest weekend in F1's history. It was Formula One's first death in twelve years with Ratzenberger on the Saturday and [Rubens]. Barrichello also had a big shunt on the Friday, so everyone was thinking has F1 become unsafe. And even before Senna was killed there was another accident where Pedro Lamy and J.

A collision at the start and it was just a very, very dark atmosphere. I was on the same plane back as Williams and it was the quietest journey I've ever made, a lot of. People were crying, a lot of people were very much emotionally affected. It was one weekend I wanted to forget - we even had a guy run over in the pits as well! Graeme Glew [far left] is now working on various projects including Series Elite.

They will compete in the 2020 GT Cup using the Jaguar XE SV Project 8. But Glew was never a photographer, he didn't work for Williams, so how could he manage to. Capture such a powerful image that speaks'a thousand words'?

My son asked if I could get a photo of Ayrton Senna. I went onto the grid and I wandered up to the front and I managed to get that very famous photograph of Ayrton just before he put his balaclava on. And even when you look at that photograph and are looking at the expression on his face, he didn't want to race, he didn't want to go out he knew something wasn't right. He told Professor Watkins that he didn't want to race and Sid Watkins basically said:'Well let's go fishing, let's both clear off and get out of here'. His response to that was:'I can't, I'm under contract' - it's as though Senna knew something bad was about to happen, it was all starting to be too much for him.

Sid Watkins [right] was the head of the Formula One on-track medical team for 26 years. He sadly passed away in 2012, aged 84. But what about his family? With a photograph of such significance, it raises the question if Senna's loved ones are aware and what their thoughts on the matter are. Glew continued: My son was out in Bahrain, the black and white version was presented to one of.

The Bahraini princes and Bruno Senna was there [Ayrton's nephew and former F1 driver]. Bruno said:'I've heard about this photo before, but I've never seen it' and now he has a copy of it - I think the family respect the photo because that was a very strong expression which I managed to capture. An image which will have no doubt emotionally hit Bruno more than any other Ayrton photograph because of its context. The black and white version. Context is something that makes a photograph more powerful and more significant.

Had this been a picture of Senna before any other race he started, then the photograph wouldn't cause the reaction it has with many people. Each reaction to this photograph is unique, minds go back to that fatal day. It's an image that hits people hard and why wouldn't it? The photograph has captured the expression of Senna and the moment before his death, something which Glew felt the first time he saw it. At that point when I pressed the shutter and the photograph was taken, I hadn't even thought about it until I got home. Then when I went to pick them up from the colour graphic shop, I was flicking through and I just froze thinking'oh my goodness me, wow', it suddenly dawned on me... That is the last photograph of Ayrton Senna. But what makes this photograph even more special isn't just its context. It was a tragic weekend which experienced two deaths [that should be unthinkable] yet is more known for Senna on the Sunday, but how special was he?

Not only was Senna a remarkable driver, but he was a'hero' in Brazil. The death caused the Brazilian government to declare an official'three days of national mourning'. He was more than a driver to those in his home country. Brazil won the FIFA World Cup later that year and dedicated the victory to Senna. But this was also a death that caused mourning worldwide.

Some were left with a feeling of guilt as avid Formula One fan Roger Bratton, traces back to that day. I always felt guilt because sports are popular as people want to watch it, if they didn't then there would be no investment made in the field - it's like I contributed to Ayrton Senna being killed. And with him missing on the grid the next race, it was tough. Ayrton was always fighting at the front but suddenly he was gone.

The corner where the accident occurred, and the chicane was introduced to improve safety. Was just one fast bend.

When I showed this photo and explained the context to a work colleague, he was speechless. He could only say'wow' whilst staring at the picture. He, too, was probably going through his own thoughts of that weekend and what he was doing at the time - it hit him real deep, like it did with me. It makes you remember the weekend, it brings back all the raw emotion of regret and sorrow of what actually happened. From workers on the grid to fans back home, this photograph takes people back. It gets those to remember that horrible weekend and the widespread impact the death of Senna caused. Twenty-five years have now passed since that day and the missing presence of Senna grows stronger and stronger. The danger sensation is exciting. The challenge is to find new dangers he once said, but unfortunately the dangers eventually got the better of him.

This item is in the category "Art\Art Prints". The seller is "glewstik" and is located in this country: GB. This item can be shipped worldwide.