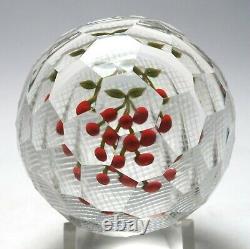 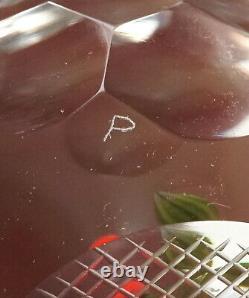 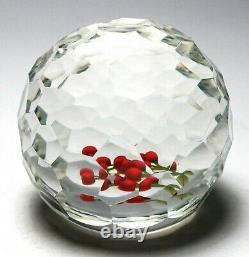 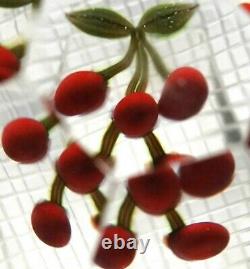 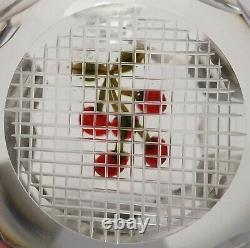 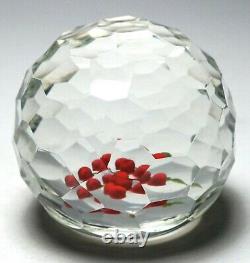 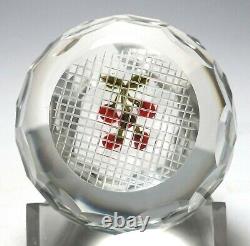 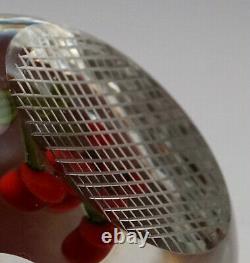 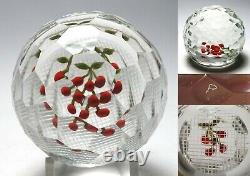 The all over honeycomb faceting makes it appear as if there are many more cherries than just five. It has a grid cut base and is engraved with a "P" signature on a facet near the base. This design was made in a 1989 limited edition of 300 paperweights of which only 154 were made. A nice crisp design with many reflections.

The annual collection paperweights are the most desirable of the Perthshire line, with the exception of one of one items. Please Note: The stand shown in the pictures is not included with the paperweight. It is shown for illustration only.

Note on white glare: Please ignore the white areas, they are glare from the light. Perthshire was a small company in Crieff, Scotland that was devoted to the creation of quality glass paperweights. They stopped production in January 2002 after more than 30 years of production. Their paperweights were consistently high in quality and yet remained reasonable in price.

The birth of Scottish paperweight making is credited to the glass making family of Salvador Ysart, who moved to Crieff, Scotland in 1922. They worked first at John Moncrieff Ltd and made the earliest Scottish paperweights during that period. In 1946 Salvadore and his sons Augustine and Vincent founded Ysart Brothers Glass and produced glass wares under the Vasart label. Salvador Ysart died in 1955 The company name was later changed to Vasart Glass.

Stuart Drysdale was hired manage the business side of the enterprise in 1960. The company evolved into a new company Strathearn owned by Teachers Whiskey. In 1967 Drysdale was sent a magazine article on antique paperweights (Woman's Day, July 1965). The inspired him to try to produce weights comparable to the French antiques.

With this goal in mind, he and several of the glass workers left Strathearn to found Perthshire in 1968. Large size : 2 7/16" diameter by 1 1/2" high. The base is fire finished and engraved with the letter "P".

The paperweight is faceted with one large top facet and five side facets. Signature : This paperweight is signed with an engraved "P" on the base. It does not have a paper label. Condition : Excellent condition with no cracks, chips, or scratches. Allan's Paperweights is owned by Allan Port.

If in doubt, please check with me first. Please do not ask me to declare this a gift. This item is in the category "Pottery & Glass\Decorative Pottery & Glassware\Paperweights". The seller is "paperweights" and is located in this country: US. This item can be shipped to United States, Germany, Japan, Canada, United Kingdom, France.