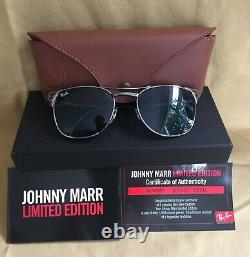 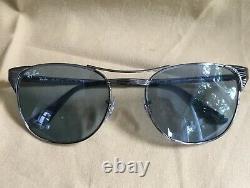 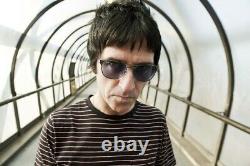 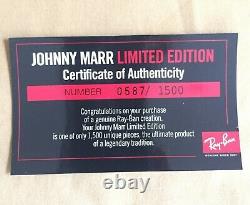 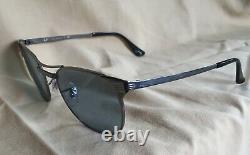 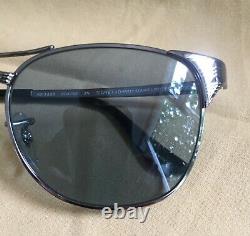 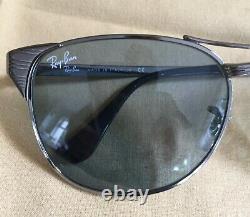 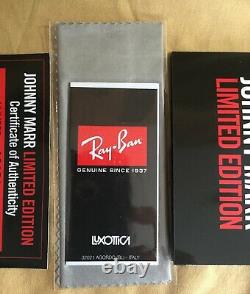 New and Unused in original box Ray-Ban "Signet" JOHNNY MARR LIMITED EDITION SUNGLASSES MODEL # RB3493 GUNMETAL/MEDIUM with CRYSTAL SKY BLUE "BLU LEGEND" 100% UV PROTECTIVE LENSES. 9 years since their release I have not seen any for sale in brand new condition for years, these are incredibly rare and a part of Rock and Fashion history.

Released in February 2012 as a Limited Edition of 1500 Worlwide. This pair is number 587 with a numbered certificate of authenticity, This is the full SIGNATURE MODEL designed and chosen by JOHNNY MARR - lead guitarist of world famous Manchester band, THE SMITHS. The lens colour "Blu Legend" was designed and produced for the Johnny Marr Limited Edition only and is not available on any other Ray-Ban sunglasses making them totally unique. JOHNNY MARR'S signature is embossed of the ear tip. With the original Ray-Ban Full Presentation Box Set, including LIMITED EDITION BOX, SUEDE-LINED CASE, "JOHNNY MARR SIGNATURE" EDITION BOOKLET, NUMBERED CERTIFICATE OF AUTHENTICITY AND SEALED BOOKLET AND CLOTH. Will come very well packaged and by Tracked with Signature required post. From a 2012 magazine article - Johnny Marr, the musical mastermind behind British indie bands The Smiths and The Cribs, has always had a soft spot for Ray-Bans. Now, his love affair with the American eyewear brand has come full circle with the Ray-Ban Raw Sounds project, where Marr got to design his own version of Ray-Ban's Signet sunglasses.

Marr made the Signet his own by choosing blue-tinted lenses, a gunmetal frame and adding his signature on the arms. For Marr, making his design debut with Ray-Ban made perfect sense. "When I first started out with The Smiths I wore them (Ray-Bans) all the time", Marr recalled. I recall I purposely ordered one pair for me so I could be one of the few people in Manchester at the time wearing Ray-Bans. This item is in the category "Clothes, Shoes & Accessories\Men\Men's Accessories\Sunglasses & Sunglasses Accessories\Sunglasses".

The seller is "djheadhunter" and is located in this country: GB. This item can be shipped to United Kingdom, North, South, or Latin America, European Union, Japan, Australia.